QUALITY OF WORK FOR DEAF PEOPLE

Visualfy is a company led by deaf and hearing people in order to create new technologies serving Deaf People.

As you can see, we have already begun recruiting Deaf People, the workforce will be increased in the following months.

If you have the right training and are interested in working in a technological company, do not hesitate to send your Curriculum Vitae to jobs@visualfy.com.

From Visualfy we want to help to change things, here we offer quality work in an environment without communication barriers, as everyone working in Visualfy is obliged to learn Sign Language.

Week after week we will inform you more about us.

SOLIDARITY COMES TO THE ATENEO OF MADRID

On Friday, February 3, the Ateneo of Madrid organises a solidarity event for good music lovers. The Madrid Actors Choir and Sign Language Interpreters of the CILSEM Association offer different types of music so deaf people can be at the same level as the rest of the audience.

This solidarity venue is sponsored and organized by the Association of Persons with Disabilities “La Barandilla” and Lajman Day Hospital. All the money collected will be entirely given to the homeless people of Madrid to provide clothing and non-perishable food products.

TEN SIGNS YOU SHOULD KNOW IF YOU ARE NOT DEAF

According to the WHO, 360 million people worldwide with hearing loss and 70 million use Sign Language (LS) to communicate, but very few people understand them. In Spain, more than one million people are facing this communication barrier. That is why they have been fighting since the 70s and on every June 14, the National Day of Sign Languages, they try to make the society aware of this group and its language.

The CNSE proposes ten signs of the Spanish Sign Language (LSE) that everyone should know:

Finally, the CNSE says that for the young deaf people, their language is everything: “their life, beauty, communication, accessibility, participation, sharing and feeling”.

On 25 January, the Health and Social Services Commission at the Senate unanimously approved a motion by Podemos-En Comú Podem-En Marea, asking the Government to recognize deafblindness as a unique disability and not as it currently stands, as two independent disabilities.

The motion, defended by the senator of We-En Comú Podem-En Marea Pilar Lima, agreed with the Popular Parliamentary Group and the Socialist Group. Senator Pilar Lima explained that the lack of recognition of deafblindness as a single disability prevents from knowing how many people are deafblind in Spain and do not value the isolation or communication systems they need or how they participate in their community.

The proposal also called for the elaboration of a national plan for the detection and comprehensive care of deafblind people to promote the full development of their rights in all areas.

THE MOST EXCEPTIONAL PEOPLE OF 2016

These are the ten most exceptional people of the year 2016: 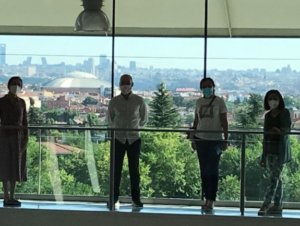 “Accessibility is a very important term and we should take it as broadly as we can”, Vint Cerf.

Visualfy interviews exclusively Vint Cerf, Vicepresident and Google’s Chief Evangelist, also known as one of the fathers of Internet. María..

FEES FOR SPANISH ID CARDS AND PASSPORTS CAN BE PAID ONLINE Fees for a Spanish ID card or passport can..

THE GOVERNMENT SAYS THAT IT WILL NOT DELAY THE AGE OF RETIREMENT BEYOND 67 The Economy Minister, Luis de Guindos,..

THE IVI WILL SAY FREE TO THE VALENCIAN WOMEN HOW MANY FERTILE OVULS THEY HAVE The Valencian Institute of Infertility..

WHY DEAF CHILDREN MUST LEARN SIGN LANGUAGE? Drisana, an Australian girl, was the first deaf user of Auslan (Australian Sign..

A NEW WIND TURBINE IS ABLE TO OFFER ELECTRICITY TO ONE HOUSE FOR 66 YEARS WITH ONLY ONE DAY OF..

QUALITY OF WORK FOR DEAF PEOPLE Good afternoon, Visualfy is a company led by deaf and hearing people in order..

BANKIA ANNOUNCES AN EXPRESS PROCEDURE TO RETURN GROUND CLAUSES Good afternoon, On Monday, Bankia announced an express procedure so that..

HUIWORK TRAINING AND SIGN LANGUAGE FREE INTERPRETER Hello everyone, From Visualfy we want to keep you informed. Talks, conferences and..

IBUPROFENO PRODUCES DEAFNESS The American Journal of Epidemiology warns in one of its studies that problems can arise due to..